Tasseomancy, and Castlemusic at The Tranzac, Toronto
05/10/10

To celebrate and officially welcome their new 7″ single, last week Tasseomancy played a rare Toronto headlining show at The Tranzac. I first encountered the twins Sari and Romy Lightman when I moved to Toronto in 2008. They were actually the first group I interviewed (when they were known as Ghost Bees) for the National Post, and their album Tasseomancy was one of my favourites from that year. In the two years since then their music has evolved to have a much darker and atmospheric sound, perfectly suited for their macabre lyrics and style. The addition of keys and drums and switch to electric guitar should help turn a few more heads, especially those who had them painted as just another folk band with nice harmonies.

Opening up the night was Princess Century, who played in complete darkness (so no video of that performance), and Castlemusic, one of my favourite local singer-songwriters. I first caught on to the music of Jennifer Castle when I saw her open for the Constantines a few times in 2008. At those shows chatty crowds drowned out her extremely quiet songs, so it wasn’t until I saw her play a church at SappyFest that year that I finally heard her for real. Ever since then I’ve tried to catch her whenever I can, but it had been a while so I was grateful for the opportunity to see her again. Armed with a batch of new songs and an attentive crowd, she made another strong case having one of the cities best voices.

I made my way over to the Tranzac last Friday to catch my friend Stuart’s monthly “Out of this Spark presents” concert. Stu’s been doing these shows for a while now and I’ve yet to miss one. They’re always nice, laid-back affairs, where you’re sure to see unique sets from both fresh talent and more established acts. The lineup for the night was The Youngest, whose short, wistful set left me truly impressed, VIVIV, the latest project from Ken Reaume, and finally, Casey Mecija of Ohbijou. I’ll be honest, it was pretty late by the time Casey went on and I’d had a few drinks, so I collapsed into a seat right up front and tried filming to the best of my inebriated abilities. So please, watch this video of Casey playing a song that I’d never heard before – her sister Jenny is singing backups and really nails it. Love ‘em.

Evening Hymns, and The Harbourcoats at The Tranzac, Toronto
04/12/2009

This past November, Evening Hymns released Spirit Guides, which was one of my favourite albums of the year. I’ve been a fan of Jonas Bonetta (the man behind Evening Hymns) for a long time now, so I’ve been really happy to see so many people discover him with his latest release. For the longest time, Jonas was a one-band-band, using only his guitar and keyboard (and a few looping pedals) to create his lush sonic landscapes. For Spirit Guides, he enlisted the help of his many talented friends (including Sylvie Smith of The Magic, Tim Bruton from The D’Urbervilles, Shaun Brodie of the Hidden Cameras, and most of The Wooden Sky), resulting in his most diverse and transcendent album to date.

Jonas brought out these friends for his album release show back in December, and I was fortunate enough to be in the audience. Here they are performing his song “Broken Rifle” – see if you can count how many people are on stage for this.

The Harbourcoats (Bry Webb, also of the Constantines) opened the show. Now, I’ve seen him play many times now going back several years, and each time has been special. The first time was almost five years ago, also at the Tranzac. I believe that was one of Bry’s first solo shows, and he only played a handful of songs (it was an afternoon gig in celebration of Three Gut Record’s fifth anniversary). The next time I saw him play was two and a half years later, once again at the Tranzac. For that show he had an entire band backing him up, with members of several prominent bands filling out the ranks. Now jump ahead to this winter, a few more years have passed and I find myself back at the Tranzac watching Bry Webb (this time wrapped in blue Christmas lights).

It’s actually unprecedented for me to have seen a performer so many times (I failed to mention above that I’ve seen Bry play at least two other times) and know the songs so well but not own their record. I can’t be blamed in this case since he’s yet to release an album!  I’ve heard for several years that he’s been chipping away at one, so hopefully we’ll have something by the end of this year. If you’re really jonesing for some solo recordings, check out 2007’s Friends in Bellwoods compilation for a cover of The Velvet Undergrounds’ “Oh! Sweet Nuthin’” he did with Ohbijou’s Casey Mecija, or try tracking down the soundtrack to This Beautiful City, which features two originals by Bry Webb called “Big Smoke” (which nominated for a Genie last year for Best Original Song) and “Positive People.” Whew.

I didn’t get off work until midnight last night, meaning I missed Taylor’s big gig, but I still made it to the Tranzac afterwards for the latest OOTS presentation. Luckily that seemed to be where most people ended up after the Timber Timbre show so I was still able to see some friends, which is key. I missed the first few acts (Chris Yang and Gavin Gardiner) but got there just in time to see Guelph’s Richard Laviolette, whose quiet masterpiece A Little Less Like a Rock, a Little More Like a Home was a favourite of mine a few years back, and who I last saw at SappyFest about a year ago. However, in stark contrast to that show, yesterday Richard was backed up by his new-ish band (well, it was the first time I’ve seen them) the Hollow Hooves, who brought some welcome muscle to his fragile sounding songs. It was a very different performance than I’m used to him putting on, but I liked it all the same.

I ducked out after a few tunes to catch up with some friends outside, but hopefully it’s not another year before I see Richard again.

Tagged Out of this Spark, Richard Laviolette, Tranzac | 5 Comments 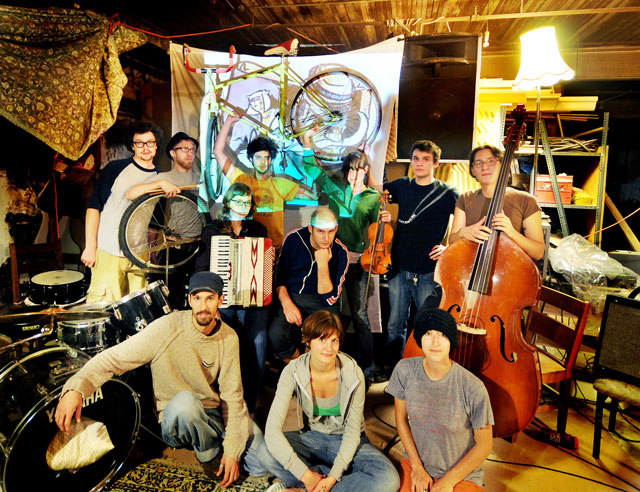 Last night I went to the Tranzac to see a different type of show than I’m accustomed to seeing. I was there to catch the Toronto debut of Le Cyc, a live music/graphic novel extravaganza. I first heard of Le Cyc last September when I was in Guelph for the Kazoo Festival, where it was being performed for the first time. I couldn’t stick around to see it, but a few weeks ago I found out they were bringing an expanded version of the show to several towns around Ontario, so I knew I had to catch it this time around.

Still, when I took my seat before the show, I had no clue what I was about to see. The large Tranzac stage was divided in two, with a projection screen in the center and various instruments on either side. I tried to decipher what was being projected – it appeared to be some sort of desert landscape with a large mechanical-looking tower in the middle – but decided to just sit back and wait for the show to start, hoping the answer would reveal itself.

A little after 9:30, the 8 person band took the stage with their instruments (piano, upright bass, violin, accordion, guitar, drums, saxophone/clarinet ), and soon the projections started. After a few slides giving some backstory on the small cast of characters, the story started. I guess if you’re reading this you might not understand exactly what’s going on right now. Imagine a graphic novel where every panel has been blown up to fill an entire movie screen, and instead of speech bubbles for characters, there are people singing all the dialogue in the form of really catchy songs. Sometimes a panel will stay on screen for several seconds, and sometimes (when there is a lot of action for example) the panels will flash by quickly, almost like crude animation. It works really well, and each panel is really a work of art, created using only ink, wine, and coffee by visual artist Dave Willekes.

So once you’ve grasped how the show is experienced, you can really sit back and enjoy the story of Le Cyc (which you’ll quickly learn is ‘cycle’ backwards). I don’t want to give away too much of the plot, but it involves a city powered by bicycles, a singing parrot, true handlebar moustaches, and an epic bike race. The show is around 80 minutes long, and it’s really entertaining the whole way through. I really hope they bring the show back to Toronto, since it’s pretty amazing what these kids from Guelph have done. The stuff that comes from that city never ceases to amaze me.